Superb location for a shoot on Port Philip Bay, these pylons a quite a site.

Headed out last night as a small window of nice twilight presented itself after a heavy shower of rain.

I will be posting more on here but also on facebook which has a few more images so head over and have a look. Please like the page, thanks heaps!

Driving around some of the back country dirt roads of southern South Australia I noticed these paddocks and came back later that day as the sun was setting. I do love an old fence post as well and these had heaps of character.

Up early shooting with the crowds that flock to the 12 Apostles this time of year. Thought I’d be the only one there. Anyway, was just about to leave before I noticed the sun lighting up the wave spray and then I noticed the lone photographer on the beach and his silouette giving scale to the cliffs.

Driving along a fairly remote area of S.A (what isn’t) I decided to turn left down a dirt road to try and take advantage of some nice summer clouds. After a couple of kilometres and cresting a hill this little scene appeared to my delight. No town for miles and only a residence every few km’s but this old church still sits proudly amidst the dry paddocks.

I’ve just completed my second trip on the Overland Track in Tassie with the first one being 20 years ago as a teenager. The weather last time was bad, didn’t see Cradle Mountain as I walked past, nor Tassie’s highest peak Mt Ossa. The weather this time was worse with constant sleet and then snow and didn’t see either mountain again, however the sky cleared one morning for 10 minutes before snowing again. Whilst the track is a lot easier than 20 years ago with some boardwalks it is still very much a challenge and the mountain atmosphere is a powerful force not too be underestimated, even in summer. Didn’t get many images but after fresh snow this place is just pure magic.

Tried for a couple of mornings to capture a scene that I’ve had my eye on for a while. The forest is lush at the moment with a few years of decent and consistant rains. A beautiful scene as the sun appeared over the horizon hitting the forest behind. Only problem, leeches. After every shot the little bastards had to be flicked off the boots and socks were tucked into the strides….luckily no fashion police to be seen.

The Dandenong Ranges gardens in full autumn colour is still one of my favourite places to be, I guess that it why I live there. Only three days after this shot was taken I went up again with the Toneman and there was no red so only a small window of opportunity to get this shot.

Anyway, was planning to get into the blue mountains about 2:30pm so that we could get the boys out of the car and have a run around but still driving around @ 4.30 after 10 hours on the road we just made it to the lookout as the sun was going down. Initially slightly annoyed at missing the last rays on the sisters but that disappointment disappeared when the sky started to light up. The transition from pink to orange was magnificent and if I took another few shots to the right to where the sun was, it was a deeper shade of red. Needless to say the dynamic range was very high and this shot took about three hours to process…

Just returned from a road trip taking images in the Northern NSW region and came across this scene. Originally trying to capture rainforest images I couldn’t stop looking for scenes to capture the greenist pasture that I’ve ever come across.

These magnificent gardens are a great place to explore. Whilst I was taken this scene, my two boys were running around, across and through the various bridges, steps and paths. The simple things really.

Borrowed the title name from Paul Kelly lyrics. Taken overlooking the big city as a thunderstorm approaches from the North West around 11.00pm last night with tropical humidity yet again. Wasn’t that much lightning but managed to snag a couple of CG’s. This is a two image stich but only used lightning from one, the other was used to get the city closer to the centre of the image with Port Philip Bay visible.

Noticed a build up of storm clouds out the back of my place so headed out for a bit of a look. Ended up down a dirt track that I’d never been down before trying to get a good look at a passing storm when I eyeballed this scene and promtly ran across the paddock before the light faded and rain hit 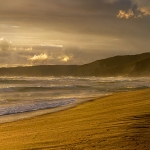 Image taken at the start of a 50km hike along the cliffs of the Great Ocean road from Johanna Beach to the 12 Apostles. Quite a tough section of the track with the peaks and troughs but scenery is magnificent for viewing, not so good for photography as it turns out but a good experience all the same.

Just adding an alternative to the previous post. Totally different lighting taken only minutes apart. Whatever bundles your hay I guess…..

Happy New year to everyone. Been down the coast and mnaged to get down to the beach just as this thunderstorm cell was forming off the coast. When it moved inland it dropped 50mm in 20 minutes in a narrow band with reports of hail as well. Not to mention plenty of thunder and lightning. Pretty good Christmas present really. This was only one of several events for this evening which concluded with a sensational sunset, a bloody good Christmas in my books

Another scene, pretty much straight out of camera, no need to saturate any of these greens! Insane considering that it is summer on Thurs….

Noticed this scene earlier in the morning on the way to the previus post and returned later in the evening when the clouds had parted with some nice golden light setting off some of the reflected euc bark. This is normally a paddock but has spent quite a bit of this year under water. Great to see really.

Another shot from the South Gipplsland region where you have to fight off the crowds to get a shot…….not. The moss/lichen on the rocks was what attracted me to the scene in the first place but the river flowing into the sea was also nice, and then the sand patterns…………not to mention the view with the cape in the background cystral clear………..and this is the spot that the state government decide to put a fucken desalination plant!. Talk about rectal cranial inversion.

Long time between posts. The beautiful bass coast in Southern Victoria, with the sand patterns and dunes illuminated by the suns first rays. Magic part of  the globe that few people see.

Another image from Autumn in Bright. 9 image stich

Typical Bright Day, crisp frosty mornings with the mist rising off the river, followed by a cloudless blue sky. I’m lucky enough to have seen many of these mornings.

Was trawling through the raw files of the trip and found a different composition of a Purnalulu scene so this one is for Truenorth Mark, as always mate, appreciate your comments and critique…

One of my favourite trees, the ghost gums. I have planted about 7 in the front yard of my place in the Dandenong Ranges, however it is not until you see them in their natural habitat that you get the true appreciation for them, especially with the backdrop of these awesome Kimberley ranges.